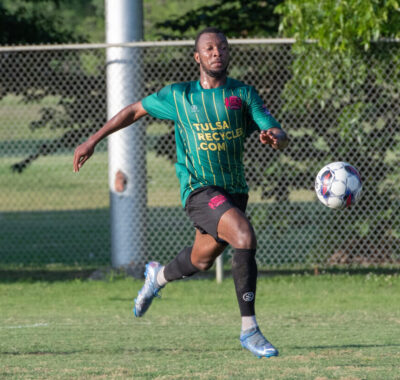 Aboubakr Diallo joins Tulsa Athletic for his first season in the green and yellow. Diallo brings experience in the Heartland Conference after playing for Demize NPSL in 2017. He was an All-American for Oklahoma City University in the fall.

2017: Played the 2017 season with Demize NPSL in the Heartland Conference…Made eight starts and appeared in nine contests…Scored two goals against Tulsa Athletic, including the game winner…For the season, scored three goals…Played 561 minutes.

College: Named a third team All-American after his senior season at OCU…Scored a team-high 21 goals in only 15 contests during his senior campaign…Ranked ninth in the NAIA in goals scored and 10th in points among the NAIA in the 2018 season…Added eight assists for a total of 50 points during his final collegiate season…Named the Sooner Athletic Conference Player of the Year…Led the conference in points per game (3.33), points (50), shots per game (4.67) shots on goal per game (2.87), goals per game (1.40) and goals (21)…Tied for fourth in the league in game-winning goals with three…Twice named the SAC Offensive Player of the Week during the 2018 season…Twice tallied four goals in a match…Scored all four goals in a 4-3 victory over John Brown (Ark.)…During his junior campaign, named All-Sooner Athletic Conference Second Team…Registered six goals and five assists in 18 contests…Started in 18 matches…Posted 49 shots and 24 shots on goal…Before OCU, played at Rose State…Tallied 12 goals and four assists during his sophomore season…Named the Oklahoma Collegiate Athletic Conference Most Valuable Player and All-Oklahoma Collegiate Athletic Conference…Started and played in all 17 matches as a sophomore…In his first collegiate season, made 16 starts…Registered 10 goals and two assists for 22 points as a freshman.