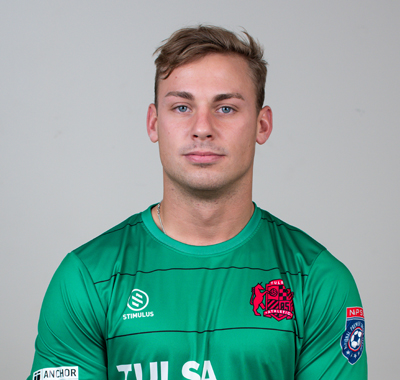 Alex Harris is in his second season with Tulsa Athletic

2019: Started three games on 12 appearances…Scored two goals, one of which being a game winner…Both goals came against Little Rock.

College: Finished his collegiate career in the fall of 2019 for NCAA Division I University of Tulsa…As a senior in 2018, played in 13 contests with four starts…Scored his only goal of the season in a win over Oral Roberts at ONEOK Field…For the season, tallied one goal and two assists for four points…Registered 620 minutes in the midfield…Posted 12 shots with four shots on goal…Named TU’s “Man of the Match” against Drake…As a junior, appeared in six matches with three starts…Selected as TU’s “Man of the Match” against No. 19 SMU and UCF…For the season, played 239 minutes with 10 shots and two shots on goal…Began his collegiate career at Oral Roberts, playing in 36 matches…In his sophomore campaign, made 17 starts and scored the game-winning goal against Michigan State…Added an assist during the season for three points…As a freshman, appeared in 18 contests with nine starts…Tallied one goal and registered one assist…Totaled 25 shots with 13 shots on goal during his first collegiate season.