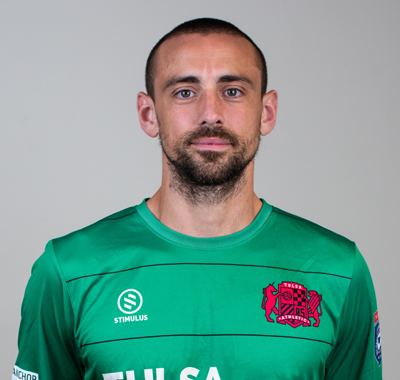 Jamie Gilbert returns for his fourth season with the Tulsa Athletic. He has played for the club since 2017.

2019: Started nine games and made 13 appearances…played 456 minutes as a defender.

2018: Made three appearances with one start…Scored one goal, the game-winning goal at Demize NPSL…Played 130 minutes during the 2018 season.

2017: Totaled three starts and appeared in three games in the 2017 season…Totaled 264 minutes on the pitch for the green and yellow.

College: Played his senior season at NCAA Division I University of Memphis…Started in all 18 contests in his one season at Memphis…Finished with three goals and one assist for seven points…Scored two game-winning goals, at Louisville and at Air Force…Started his collegiate career at NCAA Division I Vanderbilt…Played three seasons at Vanderbilt…Appeared in all 18 contests in his junior season…Helped the Commodores finish 9-7-2…Had nine shots and two on goal…As a sophomore, started in 11 of 18 matches on defense…Scored three goals and added two assists…In his first collegiate season, played in 18 contests with 15 starts…Named to the Missouri Valley Conference All-Freshman Team.