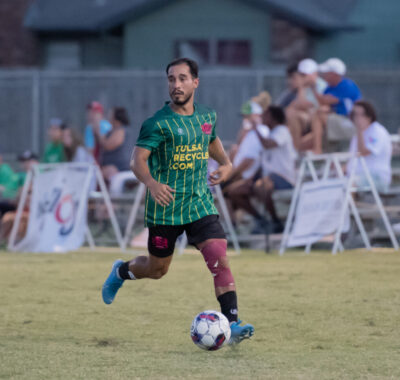 Javo Reyes is in his third season with Tulsa Athletic after playing his first two seasons with the club in 2019 and 2021.

College: Played his collegiate career at NCAA Division I Oral Roberts University…As a senior in 2016, started in 14 contests and appeared in 15…Totaled one assist…Tallied six shots with two shot son goal…Played in every match during his junior season with 13 starts for the Golden Eagles…Assisted on two goals and scored one time in a 6-3 victory over Central Arkansas…Registered seven shots with two shots on goal…Made nine starts and totaled 16 appearances in his sophomore season…Attempted seven shots with four shots on goal…Started the final eight matches of the year…Started 11 matches and appeared in 18 contests as a freshman…Earned his first career assist in a victory at Omaha…Played along a backline that set a new school record for fewest goals allowed in a season with 20…Aided in shutouts against Mid-America Christian, Missouri State, Western Illinois, Missouri State and Incarnate Word.