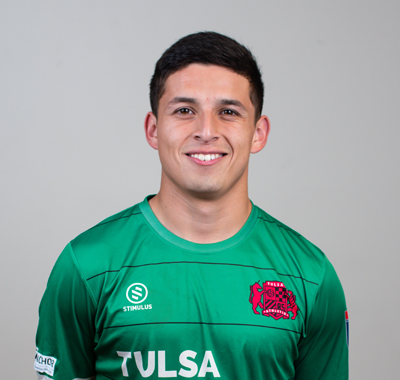 Joe Garcia is back for his fifth season with Tulsa Athletic. Through his past four seasons, Garcia has scored 28 goals for the club and has served as the team captain.

2021: Started in 13 contests and logged 830 minutes in the midfield…Led the team with 10 goals, including two goals in the NPSL Championship.

2017: Tallied six goals, including one of the best goals in club history in a win over Ozark FC, in 12 contests…Played 997 minutes…Named to the 2017 NPSL South Region Best XI Team.

College: A two-time All-American in his four seasons at NCAA Division II Northeastern State in nearby Tahlequah, Oklahoma…As a senior, netted a goal in the first 11 contests before an injury ended his collegiate career in the 12th match…The streak of 11 straight matches with a goal tied for fourth all-time nationally and was the longest streak in men’s soccer since the 2012 season…Despite missing the final seven matches of the season, posted 13 goals, tying for 26th in the nation in NCAA Division II…Finished his collegiate career with 97 points, 34 goals, and 29 assists…In his four-year collegiate career, was a two-time All-American, four-time all-region selection and four-time all-conference pick at NSU…Named the MIAA Player of the Week six times during his career at a RiverHawk.

Prep: A three-year letterwinner at Lamar High School…Named first team all-district and all-region…Named the team’s newcomer of the year as a sophomore.