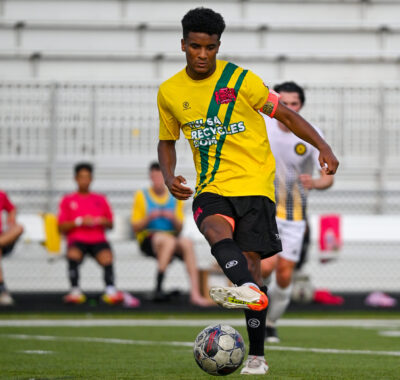 Vinicius Oliveira is in his third season with Tulsa Athletic.

2021: Started and appeared in 13 matches in the midfield during the 2021 NPSL campaign…Ranked fourth on the team in minutes played with 1,100.

College: Played at NCAA Division I Oral Roberts University where he wass a three-year starter in the midfield…Started in all 14 games in the fall 2021 season…Scored one goal and added one assist in 879 minutes…Started in 11 games with 13 appearances in the spring 2021 season…Scored one goal and totaled 848 minutes in the midfield…Named to the Newcomer All-Summit Team in the 2019 season…Started and played in all 17 contests…Recorded one goal and added four assists in 2019…Had 1323 minutes on the pitch in his first season at ORU…Finished his sophomore season at Cardinal Stritch University…Started in 22 contests during his sophomore season in the midfield…Helped the Wolves win the CCAC regular season and tournament championships as the team finished 20-3 in 2018…Played 1,411 minutes as a sophomore…Scored one goal…Finished with 22 shots and six shots on goal…As a freshman, started in 17 matches, posting two goals and two assists for six points…Registered 1,021 minutes in the midfield…Totaled 29 shots with 11 on goal…Scored one game-winning goal…Helped the team capture the CCAC regular season and tournament championships as a freshman as the Wolves went 16-4-2.