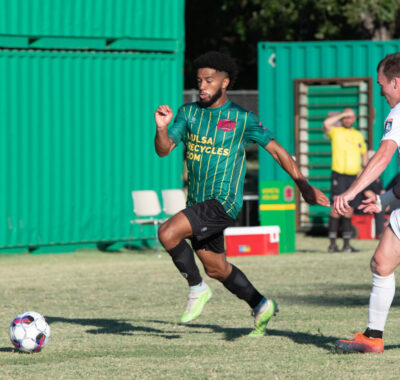 2019: Started five of the 13 matches he appeared in. Scored two goals, one of which was a game winner…. Goals came against Joy St Louis Park and Fort Worth Vaqueros FC

2018: Started in eight of the final nine matches and appeared in 10 of 11 contests during the 2018 Tulsa Athletic season…Tallied two goals, both to put Tulsa up against FC Wichita, in the 2018 season…For the campaign, played 610 minutes in the 11 matches as a forward.

College: Played collegiately at NCAA Division II Northeastern State in nearby Tahlequah, Oklahoma…As a junior in 2018, named all-conference by the MIAA for the third straight season…Started in all 19 contests for the RiverHawks…Netted four goals, including the game-winning tallies at Oklahoma Baptist and Southwest Baptist…Added an assist on the season for nine points…Played 1,233 minutes and registered 28 shots in his junior season…The RiverHawks went 15-3-1 and advanced to the round of 16 in the NCAA Division II National Tournament in his junior year…As a sophomore, earned first team all-region honors by the United Soccer Coaches along with being first team all-conference by the MIAA…Started in 18 matches and played in all 20 contests as a sophomore…Registered three goals and added four assists to help guide the RiverHawks to a 14-6 record and NCAA Central Region title as NSU advanced to the Elite Eight…Played 1,152 minutes and totaled 26 shots as a sophomore…Named all-conference honorable mention as a freshman, starting seven matches and appearing in 16…Scored two goals, both game winners, and had one assist…Played 681 minutes as a freshman.

Prep: Attended Union High School where he was all-state in soccer as a senior and led the team to a 17-1 record.